On This Day in Football History - March 16: The First Ever FA Cup Final & Much More

It is 16 March 2020 and there is no football because of the coronavirus outbreak.

But with more than a century of action to delve back through, there will never be a shortage of action and memories to quench your thirst.

Here's a look back at the various important, meaningful or noteworthy games that have taken place on this very date over the last 148 years of football history...

❌ No nets, no crossbar, no half-way line, no substitutes, no free-kicks or penalties!https://t.co/pbhYsW0CG5

Back in 1872, Wanderers and Royal Engineers contested the first ever FA Cup final. With Wembley still half a century away from being built, the game was played at Kennington Oval and was attended by an estimated 2,000 people.

Wanderers won courtesy of a solitary early goal from Morton Betts, who also played first class cricket for several counties and earned his only England cap as a goalkeeper. Royal Engineers were an army side noted for their passing at a time when ‘kick and rush’ was the common tactic. Back in 1960, Blackburn got one over on their local Lancashire rivals Burnley in an FA Cup quarter-final replay. That 2-0 victory, secured by goals from Peter Dobing and Ally MacLeod, denied the Clarets, who went on to claim the league, the chance of a domestic double.

Blackburn got all the way to the 1960 FA Cup final, losing 3-0 to Wolves in a game that is also remembered for Dave Whelan, future businessman and Wigan owner, getting stretchered off with a broken leg and reducing Blackburn to 10 men. On this day in 1965, West Ham beat Swiss side Lausanne in the European Cup Winners’ Cup en-route to becoming only the second English club to win a European trophy. Having led the way since November, reigning English champions and soon to be European champions Manchester lost their grip on top spot thanks to a shock defeat away at Coventry, which was a third defeat in four league games for Matt Busby’s team.

They went on to lose to Manchester City a fortnight later and finished the season just two points (one win in those days) behind their local rivals, who won a first league title since 1937.

On this day in 1977, David Fairclough came on as a substitute for @LFC against @ASSEofficiel at Anfield.

The original Supersub wrote his name into the history books, scoring a vital goal at the Kop end that would send Liverpool one step closer to their first European Cup. pic.twitter.com/hykk08La2B

A late goal from substitute David Fairclough against Saint-Etienne sent Liverpool through to the semi-finals of the European Cup in 1977, on the way to the Reds winning it for the first time.

Until Fairclough’s 84th minute strike, Bob Paisley’s Liverpool were facing elimination on away goals by virtue of Saint-Etienne scoring earlier that night and the aggregate score tied at 2-2. They would thrash Zurich in the semis and then beat Borussia Monchengladbach in the final. In the last eight of the 1982/83 European Cup, an emerging Juventus side dumped reigning champions Aston Villa out of the competition at the quarter-final stage.

Juve had won the first leg 2-1 at Villa Park two weeks earlier and made sure of their progress by comprehensively beating the English side in Turin. Michel Platini scored twice on the night either side of one from World Cup winner Marco Tardelli.

On the Same Day in 1983: Alex Ferguson’s Aberdeen knocked three-time European champions Bayern Munich out of the European Cup Winners’ Cup en-route to lifting the trophy. Manchester City spent the 1998/99 season in the Division Two, which was at that time the third tier of English football and a far cry from the level the club is competing at these days.

On this very day 21 years ago in 1999, City faced Notts County in a league game at Maine Road. That City team featured the likes of Nicky Weaver, Kevin Horlock, Ian Bishop and Paul Dickov, with goals coming from Michael Brown and ex-Manchester United winger Terry Cooke. 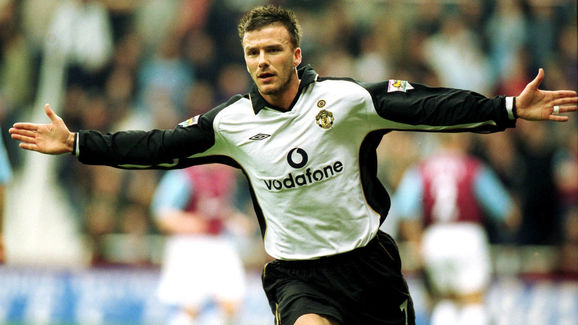 West Ham and Manchester United played out an eight-goal thriller at Upton Park on 16 March 2002, a game during which the home side twice took the lead in the first half through Steve Lomas and Freddie Kanoute, only to be quickly pegged back both times.

David Beckham scored a brace for the visitors, the first of which was an exquisite drilled finish past David James. The England captain also netted from the penalty spot late on. Rangers completed the first leg of a Scottish domestic treble in 2003 when they narrowly beat Old Firm rivals Celtic in the Scottish League Cup final at Hampden Park.

There was a distinct international flavour to Old Firms games around that time, with 1990 World Cup cult hero Claudio Caniggia scoring for Rangers that day. Peter Lovenkrands got Rangers’ second, while Henrik Larsson netted Celtic’s only goal. Despite that collapse against Liverpool in Istanbul, AC Milan were probably the best team in Europe in 2005. But Carlo Ancelotti’s vintage Rossoneri weren’t top dog in Italy and suffered an embarrassing 4-1 thrashing in the Coppa Italia at the hands of Udinese.

Udinese were a good team at that time and qualified for the Champions League, with Milan perhaps underestimating the game and resting the likes of Kaka, Andriy Shevchenko and Cafu.

On the Same Day in 2005: Newcastle hammered Olympiacos 4-0 in a UEFA Cup game. On their way to a seventh place Premier League finish – imagine that now – Liverpool were beaten 3-1 by Southampton at St. Mary’s only a couple of months into Mauricio Pochettino’s stint on the south coast. Goals came from Morgan Schneiderlin, Rickie Lambert and Jay Rodriguez.

Southampton comfortably stayed up as a result of their late season form, while for Liverpool that defeat came off the back of three consecutive defeats and was actually their only loss in the final 12 league fixtures of Brendan Rodgers’ debut season in charge.

On the Same Day in 2013: Manchester City were beaten 2-0 by Everton at Goodison Park to put a huge dent in their Premier League title hopes. Pep Guardiola’s Bayern Munich scored four goals without reply against Juventus in the second leg of their Champions League quarter-final tie, which they won 6-4 on aggregate.

Juventus looked set to go through when they scored twice in the first half in Munich to lead 4-2 overall, with their away goals cancelling out Bayern’s from the first leg. But Kingsley Coman came off the bench to play a crucial role in turning it around, as did Thiago Alcantara.