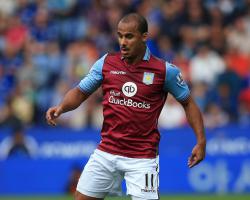 The long-serving striker has been linked with a move this month, but is in contention to face Manchester City on Saturday.

He has suffered with calf and back problems since Garde arrived in November, yet could return to the squad for the FA Cup fourth-round clash at Villa Park.

Turkish side Kayserispor have been linked with Agbonlahor, but Garde is planning for him to stay.

"I think so," said the Frenchman, when asked if the forward would still be at the club next week.

He has trained for the last week and seems to be better.

"If he's in the right mood and okay physically he could give us a lift with goals.

You're a professional player, you want to start."

Agbonlahor, 29, signed a four-year deal in 2014 and is Villa's longest-serving current player, having made 360 appearances for the club, but has played just one minute under Garde.

The Villa boss is still trying to sign new players but has struggled with the team bottom of the Barclays Premier League and 10 points from safety.

Chelsea striker Loic Remy and Arsenal's Mathieu Debuchy were targets along with Hajduk Split goalkeeper Lovre Kalinic, but Villa are facing a race against time ahead of Monday's deadline

Garde said: "Everybody is working on players

As you know, for many reasons it's difficult for us to sign players

I am still hoping I can have more.

"I will be very happy on Monday to speak about new players."

Garde remains without Alan Hutton and Carlos Sanchez (both hamstring) while Jordan Amavi is out for the season with a knee injury and Adama Traore is not expected back for at least a month with a broken foot.