Remi Garde believes his message is getting through at Aston Villa 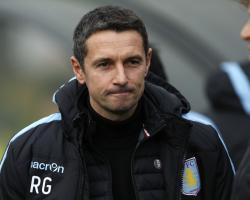 Time will tell if Garde was the right man to be charged with taking over a team in Villa's predicament, struggling at the bottom of the Barclays Premier League, but four points from the last two matches against Crystal Palace and Leicester have offered a modicum of encouragement in their battle for survival

Villa are nine points adrift of safety, compared to just four when Tim Sherwood departed as boss, but ahead of the FA Cup third-round replay against League Two promotion hopefuls Wycombe on Tuesday night, Garde believes his way of working is hitting home

And maybe my message did not go through to everybody

But now I find people who understand my message," said Garde

"The way we played, the spirit we showed and the way we have come through a difficult period in the last two games has pleased me

They were not easy because w e were up against teams who were full of confidence, when we were not

It pleased me a lot because it means that the players I picked have a good attitude."

Garde is relatively new to management, having taken his only other job with French club Lyon in 2011, but the former Arsenal midfielder has shown the strength of mind to leave out established players at Villa Park

Striker Gabby Agbonlahor, the club's longest-serving player, has made only one two-minute appearance since Garde took over at the beginning of November and those named only as substitutes against Leicester on Saturday included club captain Micah Richards and previous first-choice goalkeeper Brad Guzan.

Garde says Jack Grealish (tonsillitis) and Carlos Sanchez (hamstring) are in contention to play in the third-round replay - and he will also check on the fitness of Agbonlahor, who has been struggling for a while with a back problem.

"I will see with Gabby

I will see what I see In the training session," said Garde

"Yes Carlos is a maybe - and Jack is back training

Now it's about competition to be in the group."

Richards may also be recalled

Garde made the bold decision to leave his skipper out of the previous two teams, partly because of a foot injury, but also because the Frenchman favoured Joleon Lescott and Jores Okore at the heart of defence

However, Garde insists he still has faith in the big defender, saying: "In my position, managers have to make choices

But this doesn't mean I don't rely on Micah."