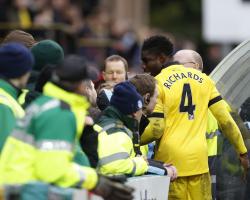 The manager also insisted he understands supporters' anger after he and the players were mercilessly abused by fans.

Garde revealed he has asked owner Lerner to talk to the fans - and believes he will speak soon - with the club in disarray and fury spilling over with Villa bottom of the Barclays Premier League.

Garde and the squad were abused as they boarded the coach after Saturday's 1-1 FA Cup draw at Wycombe, while Micah Richards also spoke to supporters to calm tensions during the game.

American Lerner has barely spoken to the media in five years and Garde expects he and chief executive Tom Fox, who is in New York to hold talks with Lerner about the club's January transfer plans, to address Villa's situation

He said: "This is something I asked from them a fortnight ago, or something like that

"At some point it is important that the Aston Villa voice is not only mine.

"This is not to avoid my responsibilities at all

I will do it as long as I am in this position at this club."

They are seven points behind second bottom Sunderland and tensions boiled over after Villa failed to beat League Two Wycombe on Saturday.

Videos of the manager and players being abused after the game were posted on social media while substitutes Brad Guzan and Joleon Lescott were also accused of playing a game involving chewing gum during the match.

Garde tried to move on from the weekend but conceded he expected the reaction.

He said: "I know football, in every country it's the same

I understand completely the fans' frustration

I am not surprised because I know that from situations from different clubs I have played and worked for."

The boss said he was not aware of the reported issue with Lescott and Guzan but reminded all players of their responsibilities.

He added: "What I can say is, as a professional player, you need to behave in the right way with respect for everybody

It's just a question of being respectful to everybody."

Against Palace, Garde is without Carlos Sanchez and Alan Hutton (hamstring), while Jack Grealish (tonsil itis) and Gabriel Agbonlahor (back) are doubts