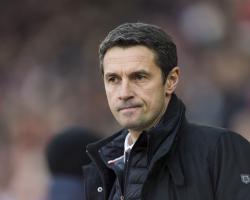 "The support that I need to make things better for the team," he said, when asked what he hoped would come from the meeting.

It's more about the players now."

Garde has asked Lerner to address Villa's desperate situation with the owner having barely spoken to the press since 2010 as he has only been at the crisis club since replacing Tim Sherwood in November.

He said: "This is something I asked from them (Lerner and Fox) a fortnight ago, or something like that

Garde and the squad were abused by fans after their 1-1 FA Cup draw at Wycombe as they boarded the team bus with videos appearing on social media.

Micah Richards also spoke to supporters during the game to ease tensions while substitutes Brad Guzan and Joleon Lescott were accused of playing a game with chewing gum on the bench.

And Garde - who is yet to win in 10 games as Villa boss - believes victory against Palace would be the best way to react.

"I understand the fans' frustration but if you look at every cup round in every country there is always at least one big surprise," he said.

"There has been in this country last weekend

But to be fair I don't think we need to apologise.

"The best apology we could give is to win the next game and give a better performance."

Garde has already lost out on players because of Villa's position at the bottom of the league and knows the squad needs another overhaul in the summer, despite the club signing 13 new players last year

He added: " In the long term, for sure

But during this transfer window as I have said, January is not the best time to do things because it is very difficult for many reasons."