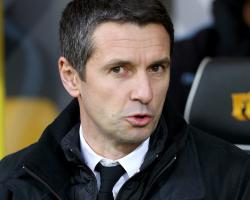 The Frenchman takes his side to Wycombe in the FA Cup on Saturday looking to somehow revive their disastrous season.

He has lost five and drawn four of his nine games since replacing Tim Sherwood as manager in November with Villa now 11 points from Barclays Premier League safety.

Key men Christian Benteke, Fabian Delph and Ron Vlaar left in the summer with the club snapping up 13 new players as they tried to end five years of struggle

"My success is not here at the moment but in only two months it is difficult to solve a problem which has been accumulated for many years," he said.

"This is not an excuse

It's just what I see now

I am trying to do all I can with my experience and my network to change this.

I was not brought in to judge what happened before

I am here to solve this problem which the club has had for quite a long time.

I am not sure the players who came are the only problem in this club."

Garde wants Mathieu Debuchy from Arsenal and Chelsea's Loic Remy to aid Villa's survival fight and said he is not preparing a squad for the Sky Bet Championship.

He added: "I'll be last man in the football club or the city to believe we can win next game and stay in the Premier League

This is the way I'm working."

Jordan Ayew and Ashley Westwood are back from suspension.