Goals from Shane Long and Stuart Armstrong helped Southampton secure an important 2-0 win over Aston Villa on Saturday, the result dragging Dean Smith's side further into the relegation mire.

The hosts started the game in blistering fashion and grabbed their deserved opener through after good work from Moussa Djenepo. ​

The Saints continued to enjoy complete domination throughout the first half with Villa not mustering a single attempt on goal in the opening 45 minutes. Southampton continued to enjoy the best of the second half and Pierre-Emile Hojbjerg came close to doubling their advantage with a half-volley on the hour mark. Villa offered very little in the way of a response with Trezeguet spurning the visitors' best chance to salvage something ten minutes from time.

Southampton finally added a second goal deep into injury time with Stuart Armstrong firing into an open net after Pepe Reina had gone up for a corner.

Ralph Hassenhuttl's team selection raised a few eyebrows on first viewing, but it soon became clear that the Austrian's alterations were made with the express intention of limiting the effectiveness of Jack Grealish.

James Ward-Prowse was selected at right-back over the inexperienced Yan Valery, which afforded the impressive Will Smallbone a debut in central midfield.

Southampton smart enough putting 2 on Grealish and it's working for them, but we need to be taking advantage of that extra man being pulled out the game #AVFC

Grealish was swamped by a sea of red and white shirts every time he touched the ball - completely stunting his team's creativity. Shane Long's contributions this season have been (understandably) somewhat overshadowed by the exploits of the Saints' top scorer Danny Ings.

That was rectified this afternoon as the Republic of Ireland international stole the headlines with his err...unorthodox goal. As well as scoring with his groinal region, Long also put in a big shift defensively, pressing well and forcing the Villa defence into mistakes.

Shane Long May have just scored with his cock. A Long Cock goal.

Shane Long’s record vs. Aston Villa in all competitions

Geez...let's talk about that first half performances, shall we? ​Villa had zero attempts on goal in the first half. None, nada, zilch.

With Grealish's influence sapped by Southampton's well executed game plan, it fell to Dean Smith's other creative players to affect the game.

Nobody stepped up to the plate, with the visitors producing an anodyne display in the opening 45 minutes.

Villa need to find another way to create chances that does not involve Grealish producing a miracle every five minutes, otherwise they could be in big relegation bother. 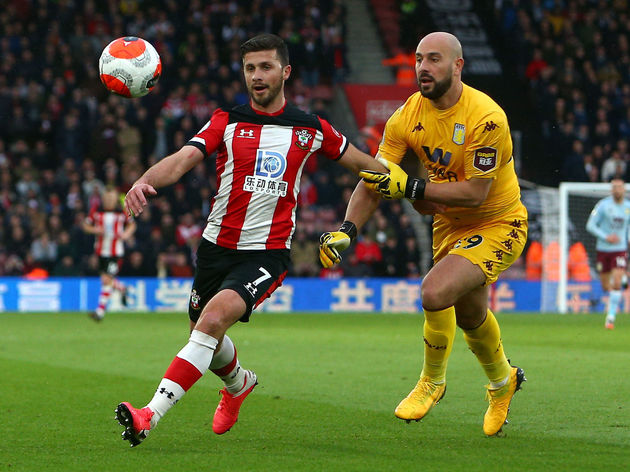 Since being brought in on loan last month, the Spaniard has rolled back the years with some impressive performances. That continued on Saturday afternoon, with the former ​Liverpool man keeping his side in it for long stretches.

Pepe Reina has made two superb saves to keep #AVFC in the game. Opening half hour as well as #SaintsFC have played at home for some time.

Southampton are back in action next Saturday when they take on another struggling side, David Moyes' ​West Ham. ​

Aston Villa on the other hand will now be eagerly awaiting next Sunday's Carabao Cup final, though they go into the game against high-flying ​Manchester City as underdogs.