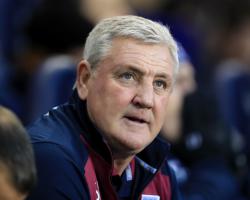 But Bruce joked Villa would struggle to pay the "ÃÂ£80million" Alli might now cost after his recent series of scintillating displays for Spurs.

The 20-year-old came off the bench after an hour at White Hart Lane and it was his dummy that led to Ben Davies heading home the opener before Son Heung-min added a second.

"I asked Dele Alli if he would come and play for us," a smiling Bruce said after the match.

"He said 'someday Steve I'd love to' but I think ÃÂ£80million might be too much for us.

"He certainly changed it for them

He has that quality that really top players have

I wished he had sat on his arse, we might have been better off."

Alli started on the bench as one of nine changes made by Mauricio Pochettino from the team that ended Chelsea's 13-match winning run on Wednesday.

Harry Kane was left out of the squad completely after the striker spent the previous night attending to his partner Kate, who delivered their baby daughter, Ivy Jane, on Sunday morning.

Pochettino admitted he had planned to name Kane as a substitute but decided the striker should catch up on sleep instead.

"It is better now after a 2-0 win to explain," Pochettino said

"I want to send from here a big, big heart to Kate, his wife.

Harry was more tired than his wife and we sent him to sleep.

"He spent all night at the hospital waiting and at 7.30am the baby was born

The plan was for him to be on the bench."

Bruce handed Gabriel Agbonlahor only his third start of the season for the tie and the forward could have given Villa the lead when his close-range finish was blocked by Toby Alderweireld early in the second half.

"Gabby has played all his life in the big league," Bruce said.

I thought he lasted extremely well and was a threat.

In the three months I've been here he has done everything asked of him after what's been a difficult time for him."

Bruce also confirmed the club had made an approach for Nottingham Forest midfielder Henri Lansbury but said they still face competition for the 26-year-old.

"We have made an enquiry but four other clubs have too," Bruce said

"We believe he is for sale but that hasn't been confirmed yet."