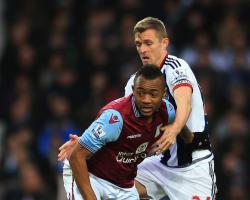 The Barclays Premier League's bottom club were unfortunate not to have a spot kick awarded by referee Robert Madley when Jordan Ayew was felled by Jonas Olsson near the byline midway through the first 45 minutes.

In a game of few opportunities, it proved crucial as the Baggies claimed a share of the spoils despite offering little attacking threat at The Hawthorns.

For the fourth time this season Tony Pulis' side failed to register an attempt on target and not even the second-half introduction of Saido Berahino, who was the match-winner in the reverse fixture, could inspire the hosts in what may prove to be the in-demand forward's final league game for the club.

Goalkeeper Ben Foster was handed a first Premier League start since March following a knee injury and he made the key save of the first period when parrying from Ayew, after he had closed down Olsson on the right flank.

It would not be the first time the winger's pace would cause the Swede issues and, on the opposite side of the pitch this time, it should have resulted in a 24th-minute penalty for Villa.

Olsson blocked Ayew's original attempt to go past him but as the ball went behind the defender, the Ghana international went around him and was scythed down by a sliding challenge.

There were few appeals from the travelling players, despite Olsson not connecting with the ball when he lunged in, and referee Madley showed no interest in pointing to the spot despite the replay showing Villa had cause to feel aggrieved

The visitors shaded the opening 45 minutes despite not troubling Foster again, yet there was a fear they could be undone by defensive indiscipline as they continually conceded free-kicks around their own area.

It was from one of those from Craig Gardner that Craig Dawson nodded over early in the second half and Stephane Sessegnon tried to inject some life into a tepid affair with a swerving try that struck the stanchion behind the goal.

With Berahino on the bench, it was increasingly looking like the stage was set for him, and Pulis did call for his forward and Victor Anichebe with 26 minutes remaining.

His afternoon lasted just 17 minutes, though, as he pulled up with a hamstring strain just when Garde was in the process of replacing Micah Richards with Jordan Veretout.

That almost proved to be a stroke of fortune when Richards met Veretout's corner in the final 10 minutes, yet he directed his header over to ensure Garde's wait for a first away win in English football goes on.