​A youthful Arsenal team beat Vorskla Poltava 3-0 in Ukraine to give themselves an unassailable lead at the top of their Europa League group with one game to go.

With the Gunners already through to the knockout stages, Unai Emery fielded an experimental lineup, with four teenagers starting and only Rob Holding keeping his place from the win at Bournemouth on Sunday.

The match was moved to Kiev at late notice after the Ukrainian president imposed martial law in some areas of the country earlier this week, making for a strange atmosphere at a sparsely populated Olimpiskiy Stadium.

3 - Emile Smith-Rowe has scored in three of his last four appearances for Arsenal in all competitions, with two of those coming in the Europa League. Claim. pic.twitter.com/DYa2HCe0JD

Emile Smith-Rowe continued to showcase his potential with his third goal of the season after ten minutes, finishing into an empty net after Eddie Nketiah had been foiled by Vorskla goalkeeper Bogdan Shust.

Igor Perduta's clumsy foul on ​Aaron Ramsey allowed the Welshman to double ​Arsenal's lead from the penalty spot as they took control of the game against opposition who offered little resistance.

It was 3-0 before half time as the impressive Joe Willock teased Ardin Dallku before finding the corner of Shust's net with a precise finish for his first goal in senior football.

IT'S THREE - AND JOE WILLOCK IS ON THE SCORESHEET!

Arsenal thought they had a fourth midway through the second half as Smith-Rowe profited from some very suspect Vorskla defending, but the goal was ruled out in confusing circumstances and the score stayed at 3-0.

Vorskla offered a bit more attacking threat as Emery started to ring the changes in the second half, and Petr Cech was called into action to deny Perduta. That was the closest the hosts came as Arsenal saw out the match to extend their unbeaten run to 18 matches.

Emile Smith-Rowe and Joe Willock were both particularly impressive as they scored first half goals and although Eddie Nketiah couldn't add his own name to the scoresheet, he showed flashes of the potential Arsenal fans have been raving about. 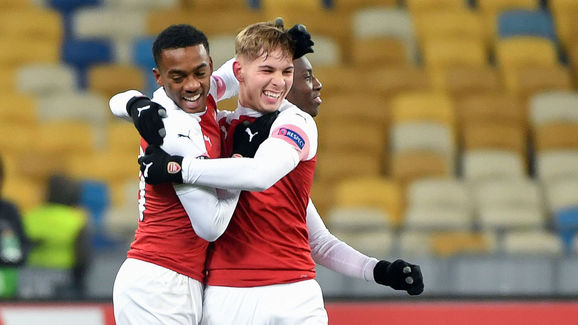 With Ashley Maitland-Niles also offering a constant threat down the left wing, Matteo Guendouzi giving another good performance in central midfield and Rob Holding keeping another clean sheet, there are plenty of reasons for Gunners fans to be optimistic about their youngsters.

Ridiculously good finish from Willock that. More than anyone from the youth team he seems to be benefiting from working with Ljungberg and that is a very Ljungbergian goal.

Willock has been doing that a lot this season - pushing forwards and getting into dangerous attacking areas. He's a much changed player to last campaign.

What a cool finish from Joe Willock for his first Arsenal goal. The kids are all right!

Given the opportunities that fell his way, you could argue that Eddie Nketiah should have scored - his reaction after the first goal certainly seemed to indicate that he thought so. His performance was lively, but as a striker he will be judged on the chances he takes - and those he squanders.
VORSKLA POLTAVA
Player Ratings
Starting XI: Shust (5); Perduta (5), Dallku (4), Chesnakov (5), Artur (5); Sapai (6), Sklyar (5), Sharpar (5), Rebenok (5); Kulach (6); Kolomoets (6)
Substitutes: Careca (6), Kane (6), Sakiv (N/A)
Looking Ahead
Arsenal return to Premier League action on Sunday with the first north London derby of the season against Tottenham, before facing Manchester United at Old Trafford three days later.
The Gunners' final Group E game is at home to Qarabag in three weeks' time. Vorskla, who were eliminated by tonight's result, finish their campaign away at Sporting.